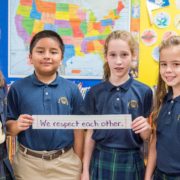 June 2018: Last week, there was an article in the Wall Street Journal – called “The Catholic School Difference” – discussing a study about the lasting, positive benefits of structure and self-discipline in our Nation’s Catholic schools.  Here are some of the key items that came away from the study and are noted in the article:

First: “Schools that value and focus on self discipline will likely do a better job of fostering it in children.” If other schools “took self discipline as seriously as Catholic schools do, they wouldn’t have to spend as much time, energy and political capital on penalizing students” for bad behavior.

Second: “Assuming that these results reflect a ‘Catholic Schools Effect,’ other schools might consider both explicit and implicit methods to replicate it.” The report notes that some “no excuses” charter schools are already doing this, through the curriculum or the way students interact with adults and teachers who model self-discipline themselves.

Third: “Don’t underestimate the power of religion to positively influence a child’s behavior.” Religion isn’t the only way to foster self-discipline, the authors emphasize, but it’s effective compared to most of the alternatives in channeling youthful energy into productive self-control.  Here is a scan of the Wall Street Journal article