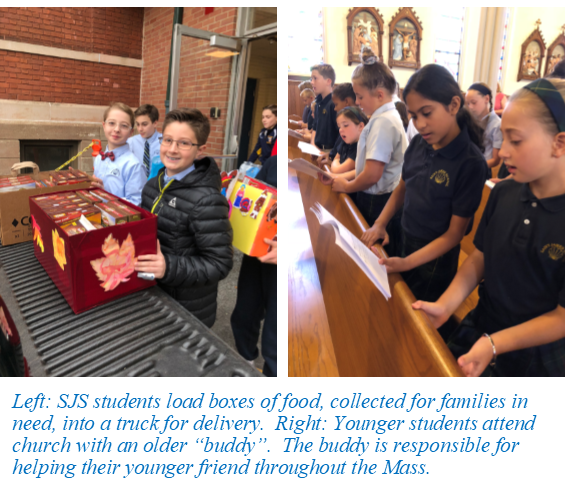 During the last week of January, Catholic schools across the nation will host a variety of activities in celebration of National Catholic Schools Week. The goal is to celebrate and bring awareness to the value of Catholic education and its contributions to our church and our communities.

Here at Saint James, we are particularly proud of our school which is widely regarded for its high academic standards, structured learning environment, and commitment to developing compassionate, civic-minded students grounded in the Catholic faith.  Celebrations at Saint James School during the last week of January include a special pep rally, a school-wide Mass to honor donors and volunteers, student-created testimonials on WJMJ, and a school-wide charitable project. In preparing for Catholic Schools Week, we gratefully thank our supporters for extolling the many of advantages of a Saint James School School education:

There is a clear mission in Catholic schools that creates a consistent framework impacting everything we do. Teachers in Catholic schools recognize they have a sacred responsibility to develop the full potential of each child: physically, intellectually, morally, and spiritually. Children educated in such an environment are generally subject to higher expectations with a curriculum that benefits from philosophical consistency instead of chaotic swings from one educational fad to another. As such, Catholic schools routinely outperform their peers when it comes to standardized tests, graduation rates, and enrollment in higher education. 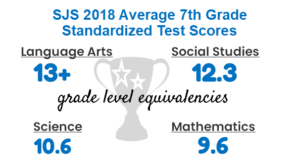 Catholic schools recognize that children are not always naturally inclined to put forth their best effort.  Discipline is, therefore, an important element in Catholic schools.  By “discipline” we are not referring to the use of corporal punishment, but rather a structure that encourages an orderly working environment and the development of good academic habits. The rules and expectations that are so much a part of Catholic schools provide a secondary support system for parents until such time as the child finds his/her inner motivation.

Parents often comment on the family atmosphere in Catholic schools. These schools tend to be smaller than their public school counterparts and there is universally a greater parental involvement. Regular activities that practice compassion and other virtues of our common Faith help to forge even stronger bonds within the school.

Catholic schools provide an oasis of parental support, particularly in today’s world where children may be constantly bombarded with negative messages. Children who receive consistent messages of faith-inspired values at home and at school are better able to navigate the world with less anxiety and greater confidence and to make good choices.

Many adults remember a time when Catholic schools were staffed almost entirely by orders of religious dressed in recognizable habits.  Let us assure you that Catholic schools are no less Catholic for being taught by dedicated lay people, who see their work more as “vocation” than merely a job. Teachers at Saint James School are well vetted through the Archdiocese of Hartford and the strong majority hold advanced degrees in addition to state certification. And, like the children’s own parents, Catholic school teachers provide role models for students on how to live one’s Faith in an often hostile world.

Parents who are attracted to the idea of Catholic schools, but discouraged by its costs, should take heart. Tuition costs tend to be much lower than those at other private schools, and for families that need it, financial help is available.

Families with young children interested in learning more about a Saint James School education are encouraged to register for an upcoming Open House event or call the school to schedule a personal tour.